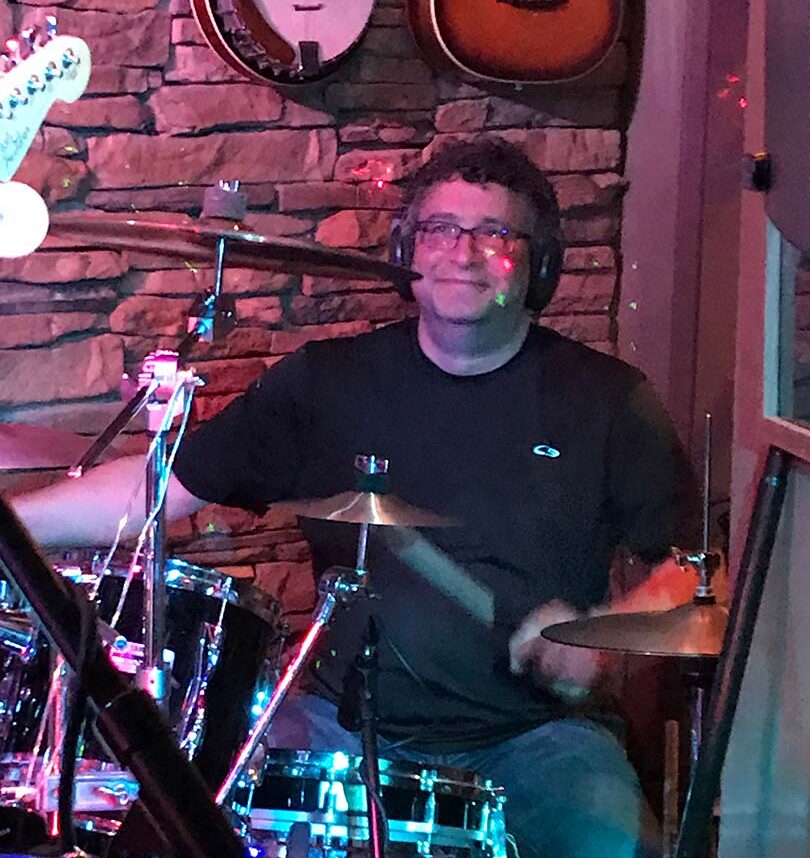 John is the nicest guy in the band. In fact he’s the nicest guy in town, and he might even be the nicest guy this side of the Mississippi. He’s also an unbelievable drummer. He’s not as good as Neil Peart (was), but he’s nicer than he was. So if you combined niceness and drum skills, John is probably the nicebest drummer ever. He never stops trying to get better either. Sometimes it’s annoying that he’s so good, and sometimes it’s annoying that he’s so nice, but I only say that because I’m not that nice. He would never say that about me, both because he’s too nice and I’m not actually good. He wouldn’t say that either, but it’s true.

John was once in a band that played the club and live music scene in NY on a regular basis. In fact, his band was in the movie Ishtar, which cost $55 million to make and had total revenue of $15 million. It was one of the worst movies ever made, but that’s not John’s fault. John had awesome hair, like David Coverdale. That was his fault. As soon as we can get our hands on a picture, we’re posting it.

John still wears an earring. Most guys can’t do this. Even in the 80’s, but especially today. But John can. He’s that cool. You see, you can’t wear an earring to try to be cool. That just makes you look like a wanker. You have to actually be so cool, that you kind of have to wear an earring. Who can do that? John can. He could probably wear a Salvador Dali mustache if he wanted to. He could wear sweatbands while playing basketball. You and I can’t, but John can.

When we’re in the studio, John drinks Heineken Light, but in moderation. The rest of us drink Dark and Stormies, without any moderation. He also makes sawdust. Seriously. On a daily basis, John will turn 2-3 sets of sticks into sawdust, suitable for making particleboard furniture. Left unabated, our floor would be covered with it, and we could open a honky-tonk bar. Which isn’t a bad idea come to think of it.

John is also a wonderful father and great husband. His wife is just as nice as he is. His boys used to be incredibly nice too, but they’re in college, so the next few years there is some uncertainty there. They are far nicer than average though, for their age. Definitely nice enough for us to be certain that they are actually his kids.

I have nothing but nice things to say about John. The whole band really loves everything about him, except for his FUBU jacket. (as told by Derek)